The Benefits of Hosting a Charity Gaming Stream

Gaming’s popularity has skyrocketed in the past few years. Millions of people now use their phones, consoles, and computers for gaming in the evenings and some gaming streams wrack up viewerships that rival the NFL or NBA.

Fundraising has also changed a lot in the past decade. Instead of campaigning in the streets with buckets and selling cookies, folks today are fundraising online with the help of new digital technology like cryptocurrency.

When the worlds of gaming and modern fundraising collide, good things happen. Big-name streamers like ‘Ninja’ and ‘Mr. Beast’ have raised millions in support of worthy causes and smaller streamers are getting excited about the benefits of gaming for a good cause.

Fundraising in the streets is a noble and necessary act. Folks who campaign in physical locations can help raise awareness in their community and inspire others to get involved with their charitable cause. However, many would-be fundraisers simply cannot take to the streets to campaign and raise funds. They either face a barrier like a lack of transport or simply do not have the time after work to fundraise in a physical location.

Fortunately, hosting a charity gaming stream is just about the most accessible mode of fundraising. Charitable gamers can campaign from their own home and can use their platform to speak directly to an engaged audience.

As well as being accessible for gamers, charitable gaming streams are perfect platforms for would-be donors. People give to nonprofits for a variety of reasons but are often put off if donating is hard or if the fundraiser lacks a personal touch. Fortunately, every major streaming platform makes it easy for folks to donate to charities and is transparent about any fees that may be taken as part of the donation.

Popular gaming titles like Call of Duty, Apex, and Rocket League might not seem like natural venues for charitable causes at first. However, many gaming developers work hard to align their products with charitable causes. For example, gaming franchises like Call of Duty — a realistic first-person shooter series  — fundraise on behalf of unemployed veterans and set the lofty goal of helping 100,000 vets gain meaningful employment this year.

Gamers can also tailor their offering to align with their target charity and audience. Gamers can use streamer tags to support causes like LGBT+ nonprofits and can show their support for Black-led causes to close the giving gap.

Gamers can also choose to play games that naturally align with their cause. For example, folks who regularly play war and strategy-based games often team up with charities that offer support to folks who have combat-related PTSD. Similarly, streamers who play sim-like racing games often throw their support behind causes that aim to promote greater diversity in real-life racing — the key is to find a cause that fits and runs with it.

Hosting a gaming stream is a great way to raise funds quickly. Viewers can usually find a link to the donation page on the stream and love the idea of contributing to something that their favorite streamer cares about.

But fundraising is about more than the bottom line — it’s also about spreading awareness by creating engagement and interest. Charity gaming streams are ideal for spreading awareness, as streamers usually have their audience's full attention during their gameplay and while resting between rounds.

While many streamers choose to run ads during their breaks in gameplay, charitable streamers can engage with their audience to raise awareness and answer any questions viewers might have about their chosen charity. This gives the target charity a personal touch and helps viewers navigate any information they might find confusing.

Streamers who want to host a gaming stream can multiply their influence and generate greater interest by creating shareable content before, during, and after their stream. Creating a Facebook announcement is easy and should include details that produce heartfelt engagement in the comment section. Promoting on social media also exposes streamers to a wider audience, which will lead to greater interest in their stream and chosen charity.

It Only Requires a Little Planning

Hosting a gaming stream is great fun and only requires a fraction of the planning needed for in-person fundraisers. Streamers don’t have to rent halls, notify local authorities, or worry about the weather — they just log on and start gaming.

But before going live, it’s worth planning ahead and finding ways to fill the dead air between rounds. Most streamers choose to collaborate with other gamers and fill this time with a conversation that audiences find entertaining and engaging. Charity streamers can follow suit by collaborating with another streamer who can help throw their weight behind the cause and spark meaningful conversation between gameplay.

Before going live, streamers must take care to protect their identity online. This is particularly important if the gamer is supporting a cause that may generate some pushback. Unfortunately, many streamers have been doxxed in the past few years and had their identity stolen or misused.

Streamers can protect their identity by keeping their location a secret. Streamers should also take care to prevent threats like having their web camera hacked by keeping their software up to date and avoiding public Wi-Fi that may also be hosting hackers.

Streaming for a cause is a great way to raise funds, create a buzz, and engage with the community. Gamers who want to throw their weight behind a nonprofit can do so by signing up to any major streaming platform and collaborating with other streamers who want to do good and raise some money for a worthy cause. Gamers who might want to stream for charity, but are unsure what cause they want to support, can find and connect with a cause through sites like Every.org. 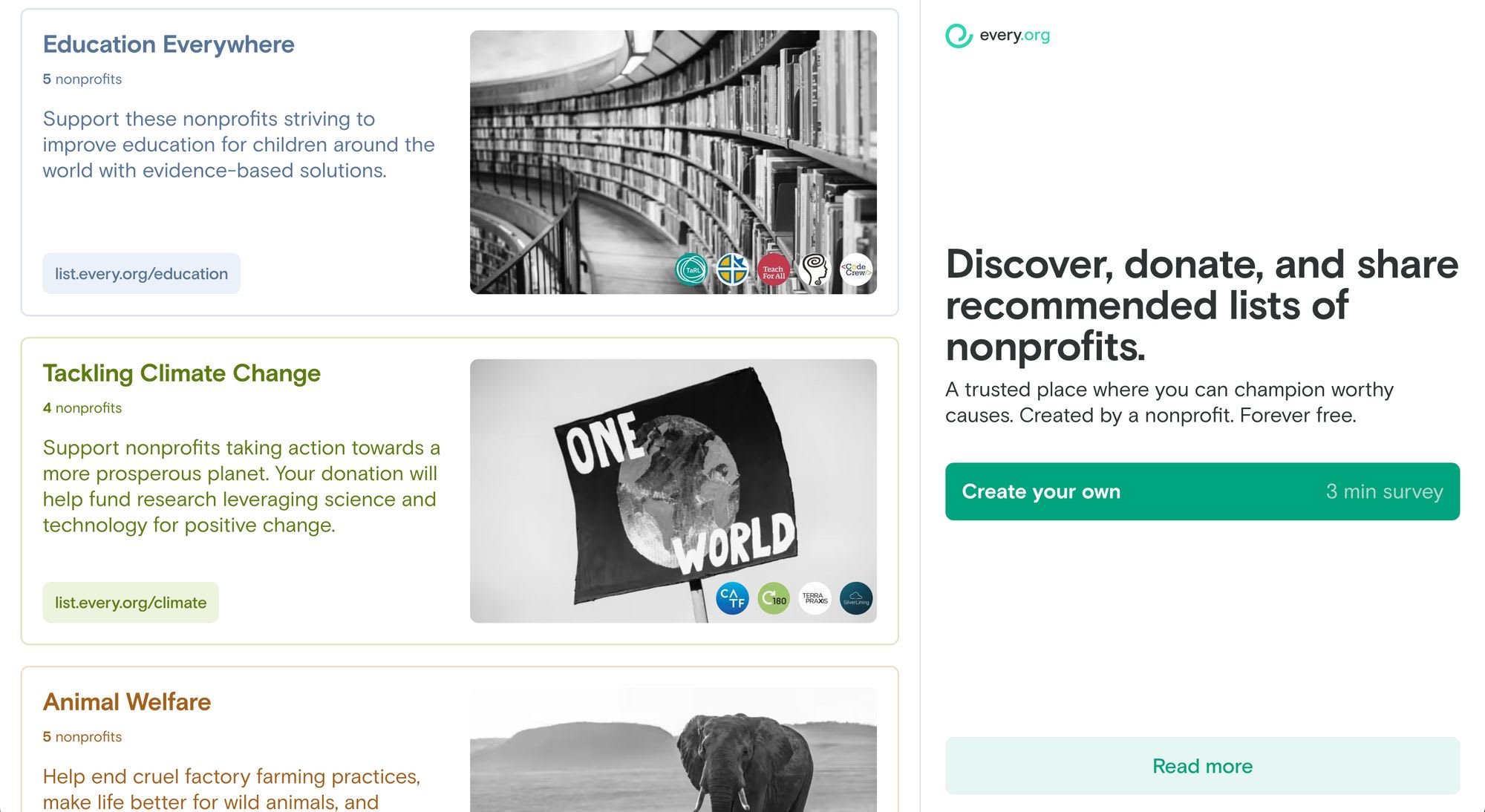 Learnings from experiments on list-based giving.